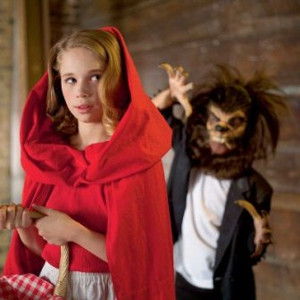 Don't forget to check our article on Halloween Party Ideas!

Pin The Wart On The Witch

You will need: One large picture of a witch either homemade or drawn with a circle drawn on the witch's face for the wart, and many small pictures or drawings of a witch's wart.

This is a take off on pin the tail on the donkey. After being given a "wart", each player is blindfolded, spun around and pointed in the direction of the witch picture. The player then attempts to walk up to the witch picture and pin his wart as close as he can to the actual wart spot on the picture. The player who pins her wart closest is the winner.

You will need: Several bags of candy corn
1 Pumpkin or other type of trick-or-treat bucket for each team
1 Spoon for each team

Divide the children into teams. Have the teams line up. Place the candy buckets on a chairs at the opposite end of the room from the children. Have bowls with equal amounts of candy corn set up by the lined up kids. The game begins when the first child scoops up candy corn with his spoon from the bowl, races to the end of the course, and dumps the candy in the bucket. The child then runs back and tags the next person who proceeds the same way. The first team to empty all the candy corn from the bowl to the bucket wins.

You will need: At least 2 balloons for each child, and enough Halloween "treats" for each balloon to have at least one. Treats can be Halloween candy or little Halloween spider rings, eyeballs, dollar store items, etc. Before you begin the game, add one or two treats inside each balloon, blow up, and tie.

Dump all the balloons on the floor and when you say "Happy Halloween" the children try to pop the balloons by sitting on them or stamping on them. You can set a limit regarding the number of balloons each child can pop to ensure that all kids get balloon treats.

You will need: One monster mask.

This is a monster version of the popular Red Light/Green Light game. Have one child be the monster first, put on the mask, and stand facing away from the other players. The other players should stand about 25 feet away (depending on the size of your space it can be closer). When the monster says “Move”, the players should creep up on the monster while his/her back is turned. The monster should quickly say “Stop” and turn around. The players must freeze where they are as soon as they hear the word “Stop”. If the monster sees anyone still moving, that person is out. The monster continues saying “Move” and “Stop”. Whoever passes the monster first is the winner. This person gets to be the monster in the next round of the game.

Place the Halloween-themed items in a circle on the floor in the play area. Start the music, and have the players walk around in a circle, stepping next to the objects. At random intervals, stop the music and have everyone freeze by the item next to them. From a jar, hat or bag, draw the name of one of the Halloween objects. The person standing next to that object is “out”. Pull that player and object out of the game. Repeat the process until there is one child and object left.

You will need: Large picture of a witch’s hat or another Halloween theme picture (you can make one on a bag or large piece of cardboard)
Pencil
Scissors
Tape
Music Player

Assign a child the role of “Music Wizard”. This child is responsible for stopping and starting the music during the game. The adult present can also take on this job. Tape the picture of a witch’s hat on the floor before you play the game. If you have a large group playing, you can tape 2 or 3 different Halloween pictures on the floor. Have children close their eyes and walk back and forth across the hat on the floor for as long as the music plays. When the music stops, the child who is standing on the witch’s hat is out.Continue the game in this manner until there is only one child who is left…that’s the winner!

Before starting the game, write the following words on a piece of paper and place the paper in a spot where all the children can see it: HALLOWEEN, CANDY, SCARY, COSTUME, GHOST, TRICK, TREAT, and PUMPKIN (or, make up your own Halloween words).Then, hand out a paper bag filled with ten pieces of candy in each to every child (in a large group or school setting, you can put less candy pieces in the bag). Have the children write their names on their bags. The children can sit in pairs on the floor with their bags of candy in their laps.

The object of the game is to avoid saying the words: HALLOWEEN, CANDY, SCARY, COSTUME, GHOST, TRICK, TREAT, and PUMPKIN when discussing an assigned topic. Every child must talk about the topic – staying silent or discussing something else is not an option. If a child says any of the Halloween words while discussing the topic, she must give one piece of candy to her partner. The child with the most candy in his bag at the end of the game is the winner.

Here are examples of discussion topics to give the children:
You have a friend from a different country visiting. Your friend doesn’t know what Halloween is… explain Halloween to him. Plan a Halloween Party. What would you do at your party? Talk about some of your favorite Halloween activities.
The game ends in the allotted time period. It’s a good idea to set a timer and let the children know that they may keep the candy in their bags at the end of the game!

You will need: Cut paper squares, one for each person, about 4"x4" with various halloween characters on them (either the word written or a picture) i.e. vampire, witch, ghost, mummy

Place a piece of paper on each person's back. Each person must take turns trying to figure out what Halloween character is on his back by asking yes/no questions. With a small group of children, have the kids sit on the floor or in chairs. The child who is trying to guess her ghoul stands in front of the group and asks yes/no questions until she can makes the right guess. Then another child takes a turn. Or, with a larger group, have the whole group play or break into smaller groups.