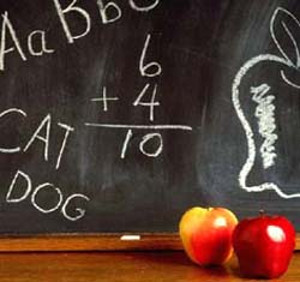 Some of the following games will have instructions on the web page while other titles will be linked to a printable page. These games should work well in the classroom as well as at home!

You will need: Large Post-it Notes (or index cards and masking tape), pen.

Math Checkers (click for game instructions and printable checker board)

Practice various various math skills through the game of checkers!

Exchange Change (for a small group)

Supplies: One die for each group of kids and change coins

A learning game that will children in early grades learn money combinations. Have each group of 2-3 students start out with 10 dimes, 6 nickels, and 15 pennies. The first player rolls the die. Depending on the number that comes up, from 1-6, he will take that many coins. If he rolls a six, for example, he can take six pennies, but then he has to exchange 5 pennies for a nickel. After a few exchanges, the student will learn to pick a nickel and one penny. The next player will do the same and take the allotted amount. On the player's next turn, she takes the allotted coins, but if she ends up with five pennies, she should exchange them for a nickel. If she has two nickels, she has to exchange them for one dime. When all the dimes are gone, the game is over and all players count out their change. The person with the highest number wins. For the next level of learning money combinations add 10 quarters and then add dollar bills.

Match The Equations Bingo (click for game instructions) Matching equations with answers in a bingo style game. Can adapt equations for all levels.

Toothpick and Coin Math Tricks (click for game instructions) Use toothpicks and coins to have fun with math!

Have a long list of math problems ready. Divide the classroom into 2 teams. At this point it’s fun to have the teams break up and decide on a team name. Draw a big baseball diamond on the board. Choose which team is to be first up by tossing a coin, picking a number, etc. Have the team “up to bat” first line up and get ready to answer problems.

The pitching team begins by “pitching” a math problem to the “batting” team. You can either have the children from the “pitching” team takes turns pitching the problems, or you can have one child designated each inning as the “pitcher” of problems. The first child “up to bat” tries to answer the problem. If the child is correct, it’s a base hit and the teacher can mark that the baseball diamond. If the child misses the problem, it’s an “out”. When the batting team gets three outs, the teams switch places. Play until the designated score is reached.